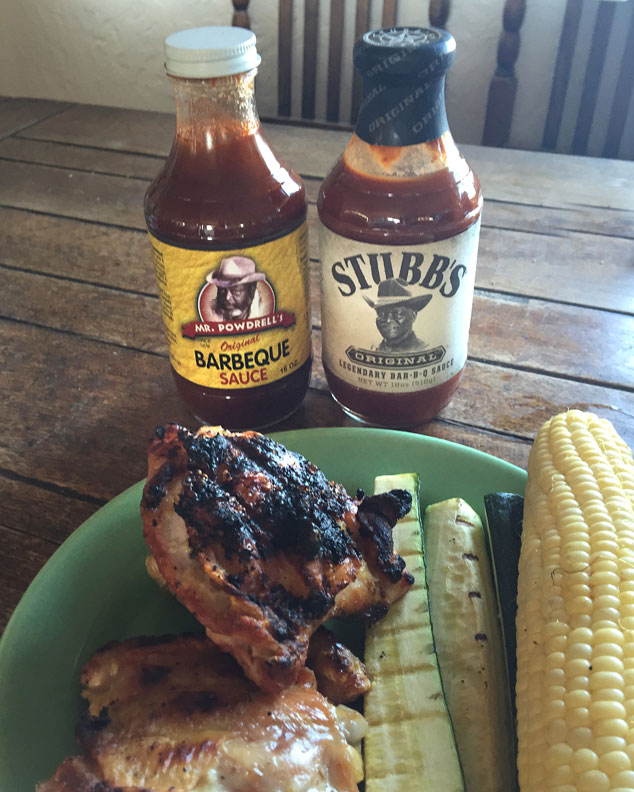 Bought a bottle of Mr. Powdrell’s sauce when I was in  Albuquerque a few weeks back. I’ve been eating Powdrell’s bar-b-que since their first store–a takeout window on SE San Pedro–opened in the late ’60’s. The Butterfields have had a long love affair with Powdrell’s soul food–bar-b-q, fried catfish. I’ve lived in Cali since 1973 but always make a trip to Powdrell’s for a brisket sandwich when I’m back in Burque’.

Since moving to the high desert in ’05, there haven’t been many bar-b-q discoveries. The best local place is Pappy and Harriet’s Pioneertown Palace which has good ribs and steaks. Living off the grid on a dirt road out beyond Rimrock often means cooking at home, which I did yesterday. Chicken thighs and drumsticks with Weber Kickin’ Chicken rub on the Weber Kettle Grill. Kingsford (hickory) charcoal, cooked 13 minutes per side. Served with grilled corn and zucchini. Always perfect.

I’ve tried many bar-b-que sauces at super market but my favorite for a while is Stubbs Original. Maybe because it reminds me of Powdrell’s. Both Stubbs and Powdrell are from Texas, with Stubbs by far the most famous, winning the Texas Monthly’s bar-b-que award numerous times and still wildly popular in Austin.

Note the similarity of the labels on both bottles. What’s inside not so similar. I dipped my first piece of piping hot thigh in Powdrell’s. Tangy but subtle and a great match to bring out the KIckin’ Chicken spices. After a few more bites I switched to Stubbs Original which is a little redder and slightly thicker than Powdrell’s. Super tangy and spicy hot. Love that zing but after a few more pieces, I liked the subtlety of Powdrell’s best with the hot off grill chicken.

Day 2–leftover cold drumstick. Dipped in Powdrell’s it was pretty good. Dipped in Stubbs Original it was amazing. I can’t answer why Stubbs was much better on cold chicken, it must be because of red pepper. Way better.

So my shootout is a draw. Since Stubbs is widely available and Powdrell’s isn’t, I guess Mr. Powdrell never really had a chance. If you’re in Albuquerque, check em out. You’ll definitely buy a bottle to go.